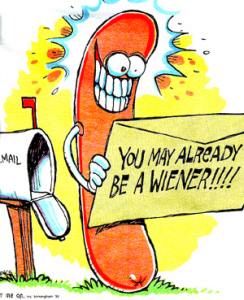 Americans think big. They want to live in hip-roofed mansions, drive gynormous SUVs, and work at jobs that pay about the same as the GNP of a third-world country. Men want big penises. Women want big breasts. They want to watch TV on a screen big enough to be seen from the next county.

So I guess it’s no surprise when the lines get longer at the convenience store when the Powerball jackpot gets to a number that’s too big to comprehend. I see them in there, shuffling along in front of me in line. Typically it’s some guy with a bulging belly, wearing a white T-shirt with the sleeves and neck ripped out, buying a pack of Marlboros and five dollars worth of lottery tickets. Never mind that the odds are something like 175 million to one. Americans dream big.

You’ll see that same old boy at the Cherokee Casino chucking quarters into the slots. Never mind that the odds on the slots are some of the worst in gambling. It’s the dream of the big jackpot that keeps him feeding the machine. If he were to say, play blackjack and win a few bucks, what’s that going to buy, a few double-meat burgers? The dream is a lot bigger than that.

A recent survey found that 25 percent of Americans think they will get rich in their lifetimes. Of course, there’s not nearly that much room at the top. There isn’t enough money in the whole country for one-quarter of the population to be wealthy. But that doesn’t stop these air castle builders from thinking they will somehow be the ones to beat the system.

What I don’t understand is how these people see any path to getting wealthy. Most Americans work at jobs at businesses that are owned by the wealthy. There’s no way the people in charge are ever going to pay you enough to get rich. That’s how they stay rich. You’re not going to make it by working for somebody else.

You could start a business, but most Americans can’t marshal the resources it takes for a start-up because all their money is going to house payments on the big house, car payments on the big car, and generally trying to live large. If you live an upscale middle class lifestyle, it’s very unlikely you’ll ever get rich. It’s more likely that you’ll get deeply in debt and at the first bump in the road, you’ll be bankrupt. I’m sure you’ve heard about the foreclosure crisis we’re experiencing as a result of exactly this kind of thinking.

So that leaves the lottery, which you’re not going to win. The lottery will be won by a group of workers in Akron, Ohio, who have been buying 100 tickets every week for the past 20 years, and even they have to surmount huge odds to win.

I don’t really have a problem with people taking on long odds. It’s how they do it that’s the issue for me. I’m a writer, so I’m used to tilting at windmills. I’ve been rejected more times than a supernerd at a sock hop. Still, I fantasize about hitting it big with my stories, though realistically I know I have only two chances, slim and none. But I’m having so much fun in the quest, I already consider myself a winner in a big way.

I create stuff. Sometimes it’s magical. I get great, warm feedback from my host of writer friends. I love doing it. The rewards are intrinsic. Isn’t that a lot better than tossing another set of losing lottery tickets in the trash?

So here’s my preachy advice to the 24 out of 25 of you who think you’ll get the big bucks, but won’t. Change your goal. Instead of aspiring to be wealthy, aspire to be happy.

I can’t say it any better than Fitzgerald did in the opening lines of The Great Gatsby. The rich are just like you and me. The only difference is the money. It’s trite but true, money can’t buy happiness. Find something else that can make you happy. Your chances will be a lot better and you won’t be deluding yourself.

You’ll be a winner, not a wiener.