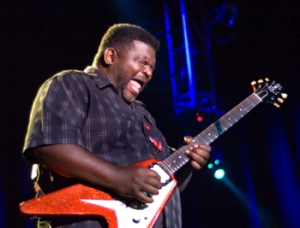 Michael Burks, one of my favorite guitarists, died Sunday. He was only 54. An extraordinary blues guitar player, Burks played with a burning passion, and listening to him perform was like watching fireworks light up the night sky.

Before he moved to the upper strata of bluesmen, maybe about ten years ago, he lived here in The Ville (Fayetteville, AR) and graced our local music scene for a few years. I first saw him down on Dickson Street, not at one of the bars, but out in the street at a Springfest celebration.

Fayetteville’s venerable George’s Majestic Lounge was where I mostly saw him play. One thing I quickly noted about him was that “The Ironman” as he was called always seemed to be on. By that, I mean his performances always had intensity and his wailing, lyrical, high voltage blues riffs just seemed to flow from his hands effortlessly. That he was a gifted vocalist and songwriter raised his talent to yet another level.

One of the memorable performances for me was at The Bayou, in Rogers, Arkansas. A friend was having a birthday and a group of us went to hear him. The Bayou is a very basic type bar, a section of a strip mall. The owner is a big fan and he made barbeque sandwiches and served them free that night. And the music made that strip mall into a concert hall.

The last time I saw Michael Burks was December 30. I had actually gone to George’s to see another of my favorite bands, and unfortunately, they had given a sub-par performance that night. Then I walked up to the front room where Michael Burks was playing and he was knocking the paint off the wall with his guitar.

I’m so glad I had my Flip Video with me that night. I went down and stood right by the stage and Michael Burks was about two feet away as I could have reached out and touched him.

It’s hard to accept that he’s gone. It was too soon for the music to end.

Here’s a link to my recording of Michael Burks performing All Your Affection Is Gone.